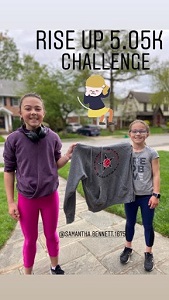 Despite the lingering pandemic, Rising Stars Youth Foundation continues to push on. According to Paul Savramis, the nonprofit’s students, staff, and parents continue to do what they can to keep life as normal as possible. Here are a few things that have been going on behind the scenes that give us a glimmer of hope for the future ahead.

Paul Savramis says the boys are not the only ones that have gotten back to the court. The girls skills academy took place between July 27 and July 30 at Long Beach High School and catered to our student athletes in the 3rd through 9th grade. Starting on August 10, the girls summer camp at St. Paul’s recreation complex will offer further opportunities for girls in the same grades.

While Rising Stars has gotten back on the court, there are still plenty of virtual connections that have allowed our self-isolating families to communicate. In May, RSYF partnered with Hofstra University, where student athletes were excited to speak with Kevin Dexter and other broadcasters about interviews with some of the sport’s greatest players.

Many of our families, including our coaches, have taken to running during the pandemic. Coach Lauren and her fiancé, along with many of our student-athletes and their parents, chose to finish their rise up 5.0 5K challenge.
Posted by Paul Savramis at 2:29 PM