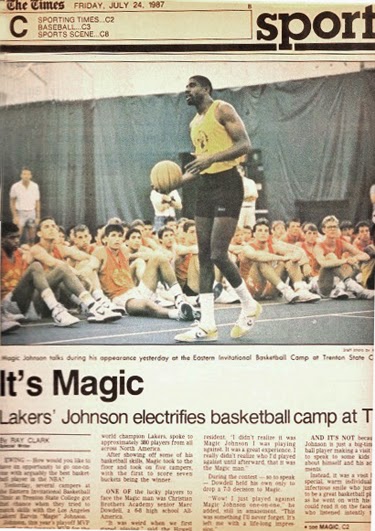 Paul Savramis has long believed in the value of combining athletics and education and the importance of balancing both. After receiving a Master’s degree in physical education with a minor in child psychology, Paul Savramis founded Eastern Invitational Basketball Camp, a summer program for youth that not only helped them to learn basketball, teamwork, and perseverance it helped reinforce the value of staying in school graduating and going on to college. Savramis not only had coaches speak about the sport of basketball at camp he brought in educators that spoke about various life choices.


Conducting Eastern over the course of each summer, Paul Savramis was able to network with other basketball camps and programs over the world.

One summer during his tenure as director, the sixth-grade members of Eastern Invitational journeyed to Europe, where they were able to play in basketball clinics with other sixth-graders.


During this time, Paul Savramis instilled the skills and values of accepting both winning and losing in his team members. These are skills that can follow these children into all facets of life, says Paul Savramis, and being able to win gracefully and lose gracefully were skills these students developed under his guidance.

As Eastern Invitational Basketball Camps progressed, Paul Savramis began to see the value of offering clinics year-round. The camps expanded to after-school programs, which were very beneficial to the summer camp students who longed to continue perfecting their skills throughout the year. It was a concept that would eventually lead Paul Savramis to found Rising Stars, a year-round program of basketball clinics and camps.

There were many benchmarks of success throughout Paul Savramis’ tenure with Eastern Invitational, including endorsements from well-known coaches throughout the country.

Unlike other camps where players attended simply in the hopes of being recruited, at Eastern Invitational Paul Savramis focused on education as the way of future development. This was accomplished by incorporating a combination of students and experienced teachers who interacted in a learning environment.

Prior to his sale of the camp no matter what the age of the Eastern Invitational attendee, Paul Savramis always ensured they worked with a college coach. He was able to host sports legends like Larry Bird and Magic Johnson, who spoke to the students and encouraged them in their endeavors and he was able to provide the highest level of satisfaction in every area of the camp.

Eventually as NCAA rules began to prohibit college coach’s from working at summer camps Paul Savramis moved on to found Future Stars and Rising Stars. Paul will always have a special place in his heart for his first camp, Eastern Invitational. Today, Eastern Invitational Basketball Camps continue to thrive and are considered the top camp in the northeastern section of the U.S. It was through Savramis’ initial vision and leadership that these camps were built and the philosophy continues to bring success for the organization its evolution and its participants today.
Posted by Paul Savramis at 5:52 AM