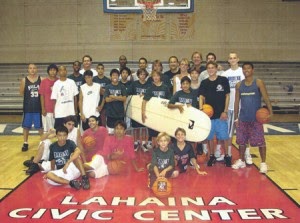 The art of coaching young children and the potential it offers as a teaching tool requires a great deal of thought and reflection, says Rising Stars founder Paul Savramis. Every practice and game offers coach’s opportunities to make the world a better place through the education and training of young people. Paul Savramis and his fellow coaches make a concerted effort to stand by the mission of Rising Stars and utilize basketball as a vehicle to promote education and to help guide young men and women through the many challenges they will face growing up. Savramis stresses, “Teaching is often the best form of learning. Very often in the act of teaching what we feel are the correct things for children to understand we can learn from them.” The ability to do that constitutes the best kind of youth coach.

Paul Savramis believes in one overarching philosophy: A coach of young men and women is, and should be, first and foremost a teacher. This responsibility can begin in the settings of a simple tryout, and then extend to practices, games and every moment in between. Paul Savramis points out that the coach should be prepared to wear many hats: psychologist, confidant, mentor and role model. Even in stressful times, a coach will need to act with integrity and respect, says Paul Savramis.

Paul Savramis often asks himself the question, “What constitutes a great youth coach?”

Certainly not someone that tries to relive their past through a child’s present and seeks to measure his own success in wins. Instead of providing solutions, a coaches’ ego can become the greater part of the problem.

Youth coaches should pay close attention to detect issues such as learning and physical disabilities, problems at home, peer pressure, drugs and bullying. These are just a few of the challenges that Paul Savramis and his team face on a daily basis. A child is generally an excellent barometer for adult feelings and emotions, explains Paul Savramis. It’s especially true if they perceive these emotions and feelings apply to them personally.

Paul Savramis encourages coaches to look beyond the clipboard or the record of wins to truly understand the important responsibility of shaping young lives. A youth coach must possess the ability to make sports fun. By doing that, they will want to be a part of a team and the process of play. That then allows coaches to guide their players in making smart choices and correct decisions during their formative years, observes Paul Savramis.

Self-esteem and confidence should be encouraged in players before focusing on anything else, says Paul Savramis. Kids need to both want to be a part of what’s going and to enjoy what’s going on. Coaches must hold a number of qualities such as composure, communication skills, and a true understanding of the athlete’s perspective.

The wrong person for the job, according to Paul Savramis, is someone who uses sarcasm and ridicule to express ideas or to correct behavior. Unfortunately, Paul Savramis has witnessed numerous incidents involving coaches that have destroyed a child’s self-esteem and in doing so alienated that child from participation in sports as a whole.

For Paul Savramis, the focus shouldn’t land squarely on those who score the most points or secure the highest grades. As a general rule, coaches should ensure that their players are respectful, kind and in good spirits. Most of all-a successful youth coach will make certain that his time with his players is the one of the best times of their lives.

Throughout his career, Paul Savramis has worked tirelessly to reinforce the qualities that he feels are essential to teaching youth sports. In doing so, his programs and coaches have established a national reputation for having fun learning fundamentals at the top of the list.
Posted by Paul Savramis at 6:00 AM