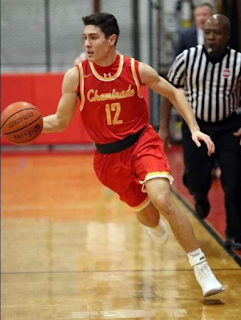 Paul Savramis has spent the last three decades creating an organization that helps link aspiring athletes to college scholarships and professional basketball opportunities. Recently, one of his most promising players received a scholarship to Stanford, despite originally heading in a different direction. He did this amid the coronavirus pandemic. Savramis opens up about the talented Michael O’Connell below.

Q: Who is Michael O’Connell?

Paul Savramis: Michael is one of our student-athletes. He first came to Rising Stars as a fifth grade boy, and it was soon obvious that the young man was a force to be reckoned with. He was a varsity basketball player in high school and also played lacrosse and football.

Q: Which one of the sports is his favorite?

Paul Savramis: Michael enjoys everything about all three. He originally was offered a scholarship to Maryland for the lacrosse team. This athletic scholarship was accompanied by a National Letter of Intent. Michael was, of course, excited and felt that lacrosse was the best choice of sports to pursue. Michael’s brother Thomas also played for Maryland and was a 2017 National Championship Winner.

Q: How did the coronavirus pandemic change things for Michael O’Connell?

Paul Savramis: When the pandemic hit, the college sporting world was turned upside down. There was soon a backlog for college roasters, and Michael had time to reflect on his decision. Ultimately, he requested that Maryland coach John Tillman released him from his obligation. He did, and Michael was soon awarded a basketball scholarship at Stanford.

According to Paul Savramis, Michael is one excellent example of how dedication, perseverance, and talent are put to good use via the Rising Stars Youth Foundation process. He is very proud of Michael O’Connell and all of the 2020 high school graduates in the Rising Stars family.
Posted by Paul Savramis at 10:03 AM