Looking Back Helps Us To Look Ahead 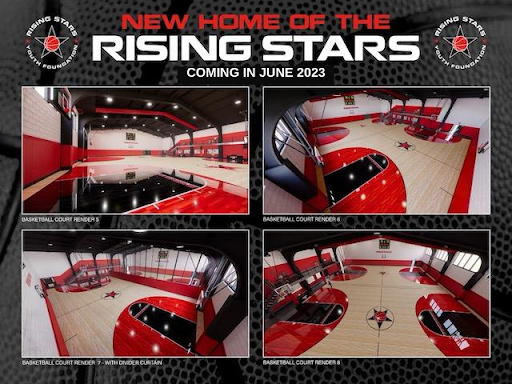 Talking to Rising Stars Founder Paul Savramis about the Future of Rising Stars
We caught up to Rising Stars President and Founder Paul Savramis at the site of the future home of Rising Stars in Freeport, Long Island, and were able to ask how it felt looking ahead to the completion of the new athletic complex in late 2023. His answers were a surprise as they reflected as much on looking back as they did on his looking ahead.
Q: How does it feel to finally have a home for all of what Rising Stars has done the past 26 years?
Paul Savramis: It feels great, and we are all excited about it, but what we did in the past 26 years to get here is, and should be, what the story is all about here today.
Q: In what way do the past 26 years define the future for you?
Paul Savramis: In every way imaginable. The best way to begin is to share these three early videos of some boys we had entering our scholar athletes the past few years that are now freshmen in college today. The schools include Harvard, Duke, Williams and Tufts… with one boy attending Williams being the only member of his family in history to graduate high school! All of these boys came to Rising Stars with a dream. Some had greater challenges than others, but all came together as a team with the same goal in mind: achieve success both on and off the courts.

Q: Is that not the mission of Rising Stars?
Paul Savramis: That is one of the goals of Rising Stars, but the mission itself is to promote education.
Q: That sounds like a very simple mission.
Paul Savramis: Yes. It is a very basic premise, but it anchors a great deal more. I look at the three videos here and I am amazed at how well the families in them speak in defining what we do and what the mission entails. They always seem to describe Rising Stars better than anything we can ever put on paper.
Q: Can you expand on that?
Paul Savramis: When you see a student talking about what the teacher has taught them, it is much more telling than the teacher trying to explain what they are trying to do. For Rising Stars it’s to utilize the power of teams to introduce the values children need to make correct decisions during the formative years of high school.
Q: Making correct decisions growing up? That sounds pretty involved. Where and how would anyone begin to do that? And how would anyone be able to show that they could do it?
Paul Savramis: You're asking how we would define success? The answer is how many of the boys and girls that are accepted into the scholar athlete programs go on to graduate high school college-ready and issue-free. And, the short answer is 100%.
Q: And the obvious next question would be what is the long answer?
Paul Savramis: The long answer is 26 years and counting. But in brief, we stack the deck before being accepted into the scholars program. A student needs to demonstrate that he can do all of what would be required of them to achieve the goals of graduation we set for them in grade school.
Q: What would those be?
Paul Savramis: They are asked to attend weekly tutoring, do yearly community service programs for the Rising Stars Foundation, and maintain an honor roll grade point average. That’s from 6th through 8th grade. If they demonstrate all of that, they can apply for acceptance to the high school scholars program which provides academic, social, and athletic support at a private high school.
Q: That’s impressive.
Paul Savramis: Not on our part as much as it is on theirs, which is why they succeed in high school. That also brings us back to the question as to how I see the past 26 years as a big part of our future with the opening of the new facilities.
Q: And how exactly does all that you described in the past make you look at the future in opening up a new home?
Paul Savramis: Those videos you have will answer that better than I can. I will add that everything we have done will now be available for us to do in one central location as a whole. The new home for Rising Stars will have much more than basketball courts. It will define what we say we do in offering opportunities for all youth to PLAY LEARN GROW. That will happen because of the additions of a Learning & Academic Resource classrooms and a Wellness and Fitness Center. But the most striking part of what I see from seeing the boys in these past videos is that they are now young men coming back to Rising Stars looking to be a part of helping others. To me this is what defines everything we have done in the past and look to continue doing here at Freeport in the future!
Posted by Paul Savramis at 5:53 AM