Paul Savramis | James Joseph Kerr Was More Than A Friend 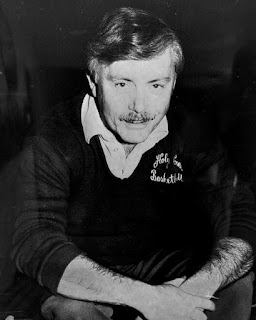 “Losing a friend is never easy…,” slowly begins Rising Stars founder Paul Savramis. “But losing a mentor and someone that directly impacted the direction and the course your life was to take is beyond description.” Continued Savramis… “on March 28, 2022, one of my best friends and the inspiration behind what Rising Stars is today, Coach Jim Kerr, suffered a stroke on the golf course at his current home in South Carolina.”
Family and friends kept Kerr company while sharing their favorite stories and memories with him and he passed away peacefully on April 3, 2022 after watching the Final Four. Paul Savramis heard the news from coach Kerr’s sons, Jimmy Jr. and Michael, and the memories they shared opened doors to Savramis’ early days and how it all began for him with all he has done to date.
Paul Savramis reflects that it was coach Kerr that invited a young college student to work his basketball camps, and it was coach Kerr who taught him what it was that could make a difference in the development of a basketball player. It was coach Kerr that introduced Paul Savramis to basketball players’ coaches and the world of basketball at a time when it was part of what was to become a legacy for NYC.
It was coach Kerr that encouraged Paul Savramis to take his first step in creating basketball camps and after that a foundation that utilized basketball to help young men and women through high school. Coach Kerr would always tell Savramis that the true measure of success would be found not in any wins or losses on the court but in looking back on the lives of all the young men and women you worked with, inspired and mentored throughout life.
Looking back on those words today, Paul Savramis can’t help but see coach Kerr in the gym with the players they both worked with. These are now fathers with sons that he works with today in Rising Stars. Dan Gimpel, Rising Stars’ current Executive Director, is one of those that Kerr introduced to Paul Savramis when he was just a 4’11 freshman at Holy Cross and the question was all about how he would survive high school varsity basketball.
Years later, Paul Savramis and Jim Kerr were both at Gimpel's induction into the Adelphi University Hall of Fame as a collegiate All-American (and youngest player ever inducted). Everything coach Kerr had said hit home that night and Savramis remembers it as if it was yesterday. Says Paul Savramis, “It’s very difficult to forget something that symbolizes a lifetime of work. Coach Kerr helped show me that some things in life are so much more than a job. He didn’t have to explain that because every day of his life he lived those words.”
One of Jim’s mottos and the thing he would tell Savramis every day of their routine of power walking during lunch breaks in Flushing’s Bowne Park was “do what you love and you’ll never work a day in your life.” Those words will live on as they are the same words Savramis tells all of his coaches and words they tell others.
“Yes, it is hard to lose a friend,” Savramis concluded. They are a part of who you are. According to Paul Savramis, “There are also those that are a part of what you are and they are the ones hardest to say goodbye to.” For those friends, Savramis finds comfort in thinking on the day to day messages they leave for us and everything they stood for that helped define who and what you are.
To coach Kerr - Thanks for everything and see you again.
Posted by Paul Savramis at 2:01 AM