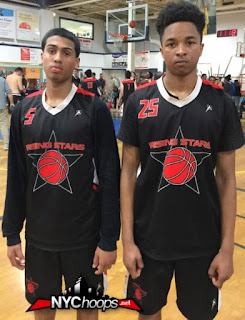 Basketball means much more than just fun and games to Rising Stars student athletes. For many, it is a means of  “Rising” above and having an opportunity to channel their energy into a productive and positive experience. Here, Rising Stars founder and former Executive Director Paul Savramis sheds light on one of the ways the organization works as a team to help foster the growth of some of its brightest stars.

Q: In previous interviews you have stressed how much Rising Stars student-athletes do, both on and off the court. What does Rising Stars try to do for its seniors after years of playing for your teams and doing community service?

Paul Savramis: Every year we look at our teams and begin to prepare them all for the college application process and help to guide them along the way. Rising Stars measures their success by how many of its seniors go on to college.That measure does not necessarily mean they go on to play college basketball. It does mean they are ready for college issue-free and prepared for what lies ahead. Rising Stars' mission is to see improvement on the horrific stats nation wide that measure that same goal. I am proud to say to date we are over 90% vs national averages of under 50%.

Q: Basketball seems to remain the constant in how you are able to keep your student athletes involved. What was the most notable accomplishment for the 2017 Rising Stars basketball program season?

Paul Savramis: Our 16U team won one of the biggest tournaments of the year, the Metropolitan AAU District Qualifier Championship. While this victory was certainly the result of a collaborative team effort, two of our student athletes, Elijah Perry and Tyler St. Furcy, have garnered a great deal of attention. That is especially significant for us as both boys have been enrolled into Rising Stars as part of a community outreach program since grade 6.

Q: You have talked about Elijah before as a great role model and the brother of another younger Rising Star, Luke Perry. What would you say is Elijah Perry’s strongest on-court asset?

Paul Savramis: Well, to answer that, I again stress we have talked about both Elijah’s on-the-court and off-the-court strengths. On the court, there’s no denying that Elijah is a sharpshooter. He’s one of the best I’ve ever seen, especially for his age. At 6’2”, this high school sophomore is slated to be a standout even among our seniors next season. His skills just get better and better and he is developing physically and mentally into an outstanding college prospect, both on and off the court.

Q: How would you describe Tyler St. Furcy?

Paul Savramis: I would say that Tyler is a potential Division I athlete.  At  6’4”, Tyler is definitely not one of our tallest players, but his energy picked up a lot of interest after playing a recent Hoop Group event. Iowa and Boston College are just two of the schools that have expressed interest in this outstanding young man.

Q: What makes Rising Stars different from other “ AAU “teams?

Paul Savramis: We are totally independent and are not tied into or financially backed by any of the big-name athletic companies. That allows us to pick the best tournaments regardless of affiliation and do what’s best for our players. Many are sent to academic camps and educational weekend sessions that are geared to their college choices and interest.

In that way alone, there is a big difference as we put individual concerns on par and over winning games. That said and with all of our other requirements of academic and community time spent off the court, we do very well on it. We recently won out over the New York Rens, despite their funding and affiliation with Nike and mostly all about the ball philosophy. I think the boys and girls on all of our teams play basketball like it’s a game and a part of life and not as a life or death situation.

Posted by Paul Savramis at 7:41 AM